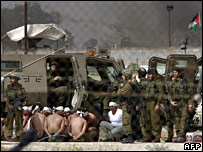 UK and US prison monitors deserted their posts in a Palestinian jail in order to allow Israeli troops entry without embarrassment. Jack Straws personally ordered the withdrawal and has admitted in the House of Commons that he gave no advance notice to the Palestinian Authority that they would be withdrawn.

15 minutes after UK and US monitors left the jail in Jericho the Israeli Defence Force (IDF) launched an explosive attack with an armoured bulldozer, attack helicopters, three tanks and many troops, which has killed at least 2 people and injured around 30. The jail has been all but destroyed in the process of the attack.

The IDF stated that they wanted to seize Ahmed Saadat leader of the Popular Front for the Liberation of Palestine, who is blamed by Israel for killing a cabinet minister in 2001. They have now say that they have seized 182 people.

Palestinian leader Mahmoud Abbas has condemned Britain and the US for pulling out the monitors and said they were responsible for the prisoners' safety. This jail invasion has sparked massive violent protests against the British Council, which has been set on fire, other British linked buildings (including an HSBC bank) and a number of kidnappings including a US man, Australians and Koreans.

Whilst Israel's actions are utterly unacceptable it is the UK (and US) collusion with the IDF that is most shocking. Whilst Straw is happy to announce that he did not allow the Palestinian authority any notice of his people leaving the prison, the fact that the IDF attacked just 15 minutes after they left show that they were both ready for the assault and confident that the international observers would no longer be there - it is impossible for them to have had this confidence without collusion on some level.

Selection of the press so far